As the federal election draws nearer, the tactics used to win the votes of Australians are becoming more and more despicable. Fear mongering and other misleading tactics (not to mention outright lying) are now common place in Parliament House. Sadly, a large portion of Australians are now convinced that boat people pose a major risk to Australia, seemingly believing that every day hoards of “illegals” are descending upon our country, and that the situation is a “National emergency”.

When considering the actual challenges our country faces, boat people are NOT a major issue in Australia. . In reality, Tony Abbott and Kevin Rudd have defined Asylum Seekers arriving by boat as a problem and are now using the plight of the world’s most vulnerable people as a platform to try and win the next election. Our leaders should be working towards educating their people, rather than misinforming and scaring them.

I thought democracy was about being able to vote for who you wanted.
This upcoming election will be like sitting down to the dinner table
and having to choose between shit and vomit for your meal.
I WANT LASAGANE! 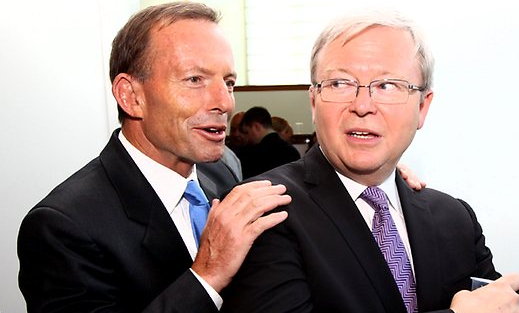 Since these two “gentlemen” won’t state any facts, we’ll do it for you:

Asylum seekers arriving by boat are NOT illegal.

Asylum seekers have left their countries of origin due to a well-founded fear of persecution. Australia, a signatory to the Refugee Convention, recognises this definition of a refugee. Asylum Seekers are attempting to come here to find safety and start a new life where they and their children have a future.

Under Australian Law and International Law a person is entitled to make an application for asylum in another country when they allege they are escaping persecution.

While it’s certainly most tragic that some people drown off our shores whilst attempting to come here, it is just as bad that we treat the rest like criminals. We are signatories of the Refugee 1951 convention and should be behaving in a humanitarian manner.

Australia does NOT already take too many refugees

Until August last year, Australia accepted 13,750 refugees annually. Under Julia Gillard, this figure increased to 20,000. In UNHCR’s report Global Trends produced in June this year, figures indicate that over 23,000 people daily are forced to flee their homes due to conflict or persecution.

Currently, over 45 million people are displaced due to conflict or fear of persecution. The United States, Germany, South Africa and France received the highest number of asylum applications in 2012.

Our country was built on boat people

Over 200 years ago, boats brought thousands of petty criminals across to Australia and ‘made’ them live here. Those people turned this country into what it is today, as have the thousands of migrants from all over the world who have also arrived here by boat since.

The majority arriving are REAL refugees

Despite what the Government might have you believe, over 85% of asylum seekers arriving in Australia are found to be legitimate refugees. Which means they should be treated as such. Which is why the UN has expressed alarm at Australia’s deteriorating support for asylum seekers.

Refugees will NOT take our benefits

Refugees are like migrants, they boost demand for goods and services and actually stimulate growth in the economy. They are not free-loaders wanting to get something for nothing. In actual fact, their pursuit for a better life can make them enthusiastic contributors to the economy and broader society.

Sadly many Australians don’t have an appreciation of how lucky we are to be from this country and reap the benefits being Australian provides for us. We could have just as easily been born into a poverty stricken family in another country. To say no to legitimate asylum seekers is selfish and ignorant. 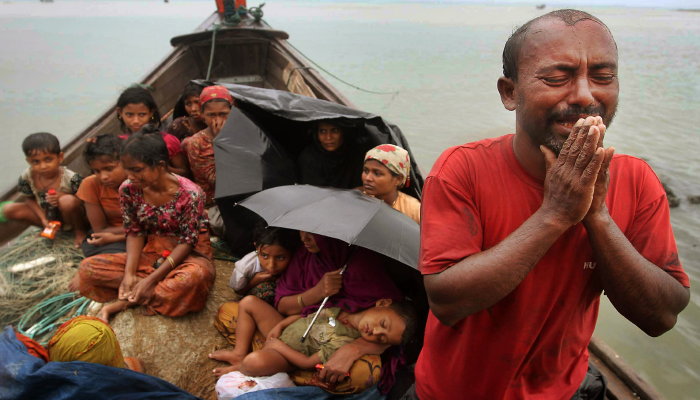 SO WHAT SHOULD WE DO?

This next passage is an opinion.

Asylum seekers are a fact of life. While there is conflict and persecution around the world, people will continue to flee their countries and look to settle elsewhere. Because of this, the boats will keep coming, no matter what type of approach we take.

Therefore, we should look to act as humanely as possible and embrace asylum seekers. Let them become part of the multicultural nation that we are today.

A relatively small number of people coming to Australia seeking asylum come by boat however they spent disproportional amounts of time in processing centres. They should be processed in Australia in a speedy and timely manner and then resettled in the community where they can contribute to the growth of this great country.

This is by far the most human and most economical solution. Off shore processing is not only inhumane, but expensive and those funds could be much better spent elsewhere.

But if common human decency and compassion isn’t enough to convince you, how about diverting money currently spent elsewhere? I’d much prefer to see money spent on building adequate processing facilities in Australia than spending billions on a war on the other side of the world.

Even today, we are spending millions on military action in Afghanastan. This is to help disadvantaged people suffering hardship and horrific conditions in another country. Isn’t this the same thing? How can we happily invest in helping suffering people on the other side of the world but refuse to help suffering people on our doorstep?

Don’t let the leaders of this country tell you how it is. Discover for yourself, and speak up!

If you want our country to stop turning its back on asylum seekers, sign the petition.

2 Responses to Enough is enough